It’s been two full weeks since I turned 30. It’s also been two full weeks since I wrote a blog post. (Not counting my regular contributions to The Daily Post’s Weekly Photo Challenge.) Yes, it’s safe to say that I’ve had a bit of writer’s block since my BIG B-DAY. I’m not sure what to attribute it to – I mean, I tried to write. I even included “write a blog post” on my to-do lists. But, for me, things can’t be forced.

The truth is, I guess I’ve been a little distracted these past two weeks. Not only did I turn a year older, but I am still in the midst of making big changes in my life. This is the first month since I left my teaching job that I didn’t have a trip to California planned or a series of classes and workshops booked. Since I am seriously considering moving out west early next year, I’ve kind of designated December as the month to just enjoy being in New York with my friends and family – in addition to trying to book gigs and make arrangements for the big move. It’s all been exciting, scary, fun, and uncertain at the same time. And as I sit here now, I am reminded once again why I love having a blog. My mind may have been stuck for a few days, but as each word appears on my screen I once again feel motivated and more like myself.

For this “Decemberings” post, I am looking back at the past two weeks, sharing different moments that I spent in my hometown and in the city.

12/5 The day after my birthday, I went to the city to audition for a role in a short comedy sketch. Afterwards, I left the building and was in smack dab in the heart of Manhattan on an unseasonably warm December evening. The obvious next move was to head to Rockefeller Center and get my first glimpse at the tree and all the other festive landmarks.

From Radio City Music Hall to giant light fixtures and ornaments to the majestic tree itself, this night in the city was a wonderful kick-off to the holiday season.

12/7 The first Saturday in December was the date of my 30th birthday party.

I woke up feeling festive and ready to party! Once we were all packed, my sister, Kelly, her boyfriend, Wayne, and I headed down to the city and checked in at the Hotel Beacon, an adorable hotel on the Upper West Side. We popped some champagne and proceeded to get dolled up for the night. Next, we met my two best friends, Kate and Brianne, at one of my favorite restaurants in NYC – Pio Pio. It’s a Peruvian restaurant with yummy food and amazing, potent Sangria. (Which, if you read my “30 Things I’m Happy I did Before 30” post, you know is my favorite cocktail.) We enjoyed a few pitchers of that, plus some roasted chicken, rice and beans, avocado salad, and tostones. Delish! Finally, we made our way to Hudson Common, a bar in the Hudson Hotel, to meet some more friends and really get the party started. It was such a fun night. I danced and laughed and felt very happy and fortunate to be able to spend my birthday with some of my closest friends and family. 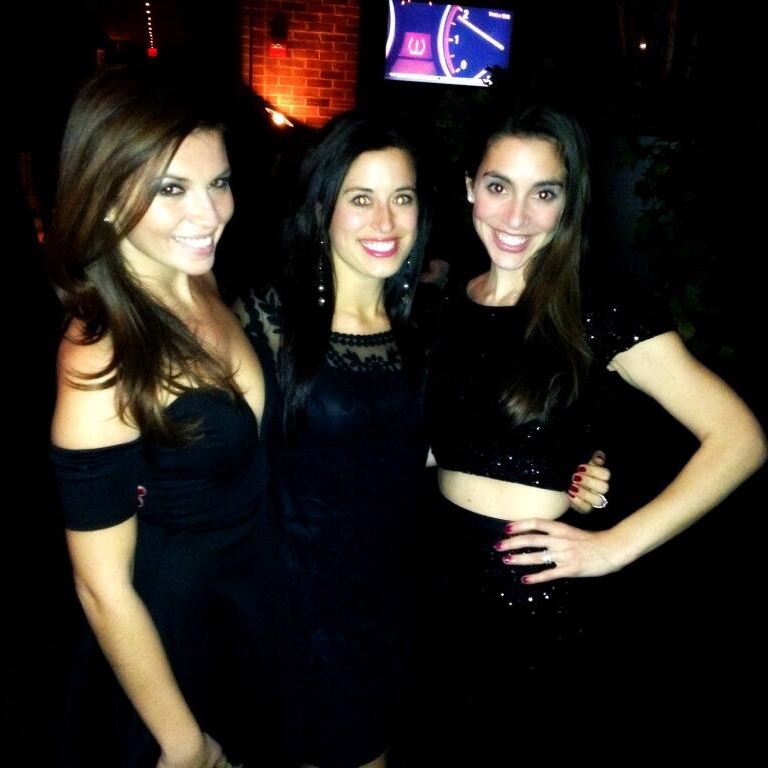 Two of my dearest friends, Kate and Brianne. I’ve known Kate since 4th grade and Brianne since 6th; it’s been such a blessing to have these two in my life.

So happy to have celebrated with two of my new friends, Charna and Kathleen.

And then there’s these two. The absolute loves of my life…my brother, Billy and my sis, Kelly.

12/8 After a good sleep at the Hotel Beacon, we decided to grab brunch in the city before heading home. It was a very chilly afternoon, but it was nice to wander and see the sights.

Kelly and Wayne bundled up. 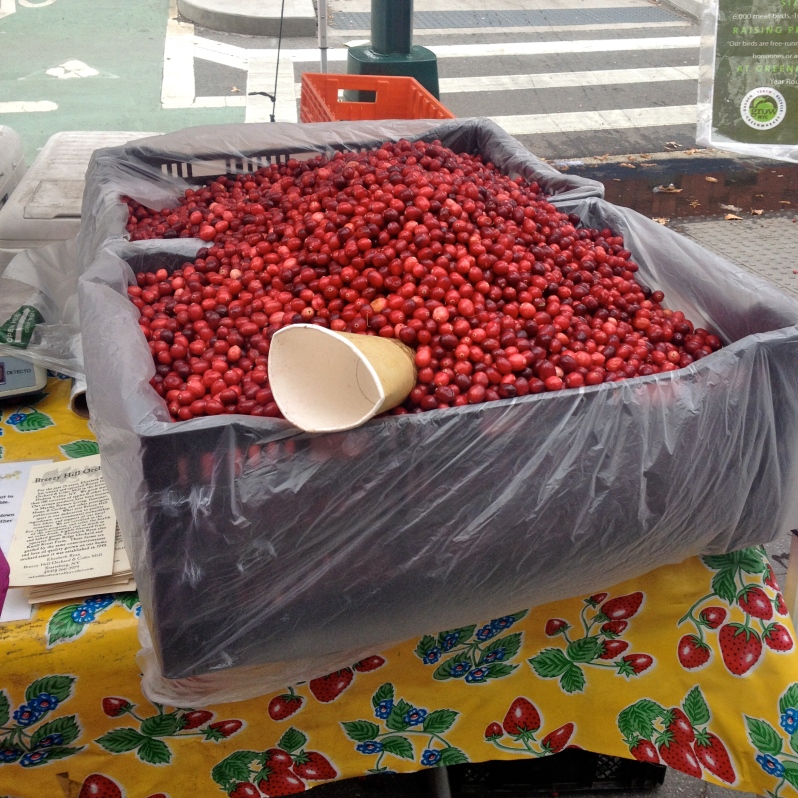 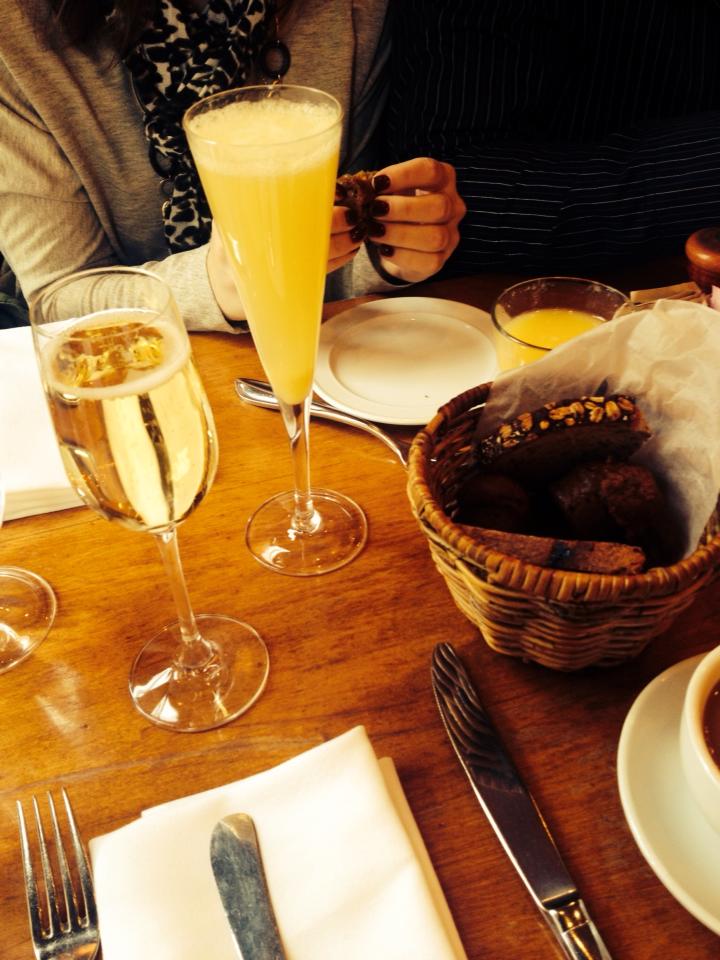 Brunch at Nice Matin. Kelly’s glass of champagne ended up being $17. Not so nice. But she’s worth it.

12/9 I started off the next week by traveling back to the city to audition for a Nespresso coffee commercial. I didn’t end up getting the job, but it felt good to actively be doing something that I only used to think about. And, I was given a little extra motivation that day as I waited for the elevator:

12/10 Winter really started to kick in on the 10th as our evening was met with some snow flurries.

On snow patrol with some snowmen.

It was the perfect night for some hot, homemade soup.

12/11 Last Wednesday morning, I headed to Brooklyn for a National Geographic shoot. I was chosen to be a principle cast member in an episode of Nat Geo’s show BrainGames. Woo! I don’t want to go into detail about the premise of the episode just yet, but it was definitely a fun day. It felt good to be on set and in front of the camera again. I also met some great people. That’s what I love so much about doing these new projects. I am constantly interacting with interesting, multi-faceted people that bring new perspectives and conversations to the table. It was a good day. 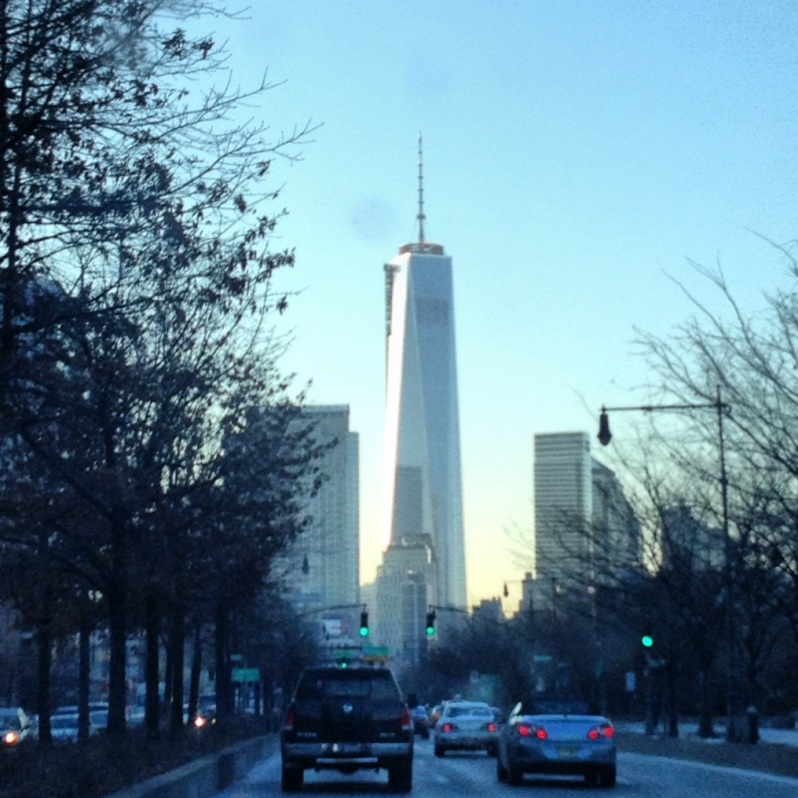 En route to Brooklyn…gorgeous view of the Freedom Tower from the West Side Highway. 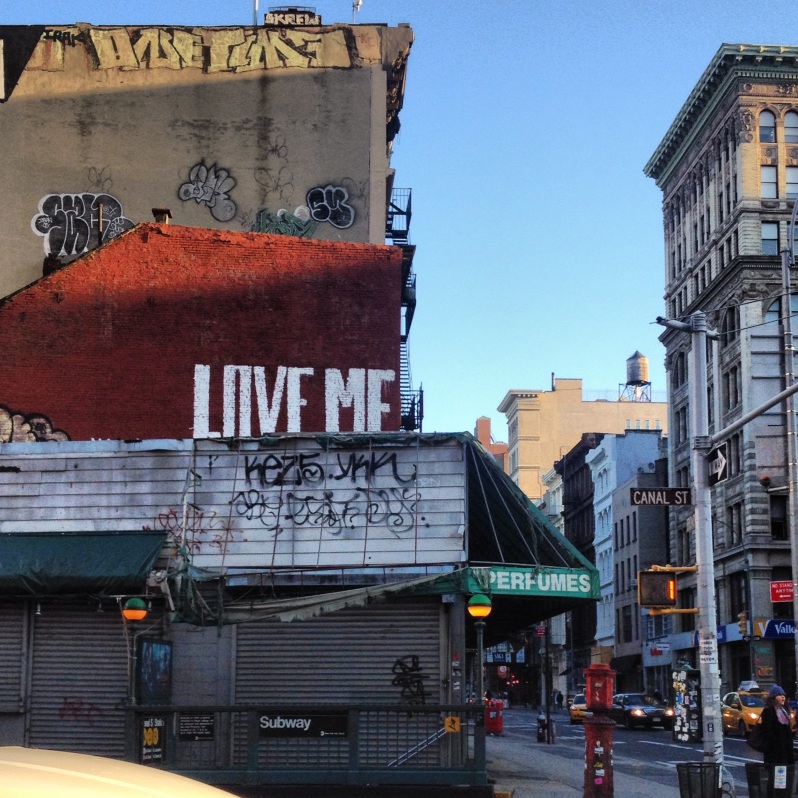 A shot from Canal Street. 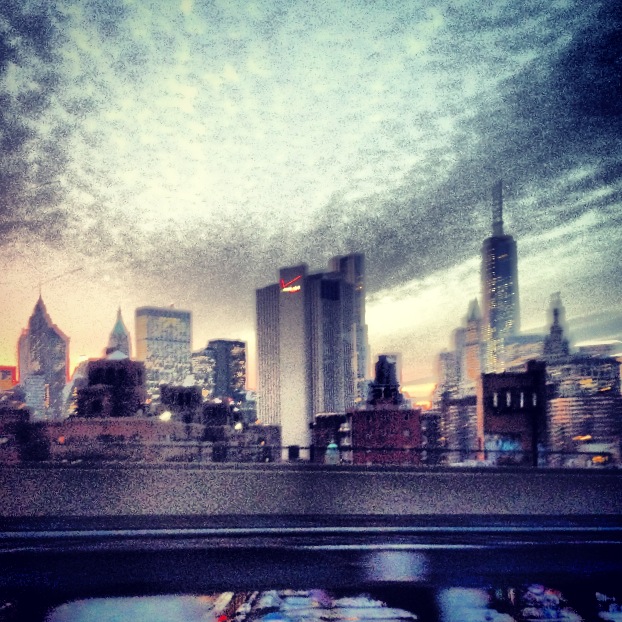 The ride home after a productive day. Love this shot from the Manhattan Bridge.

12/12 I ran a few errands near home last Thursday and I just remember it being sooooo cold! 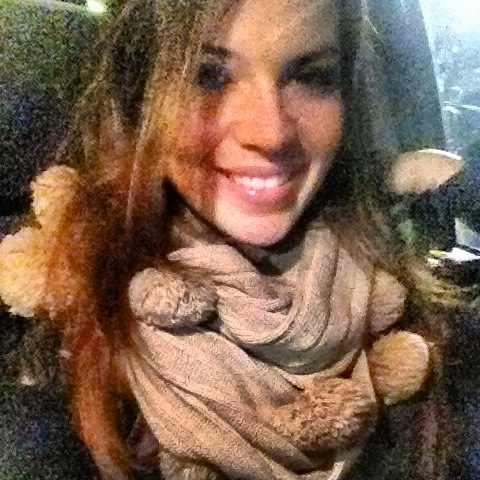 Was very happy to be bundled up in my scarf.

12/13 Uh-oh, Friday the 13th – the night before another impending snowstorm. I took the opportunity this night to stroll around my neighborhood and clear my head.

Hardly any snow on the ground – yet. 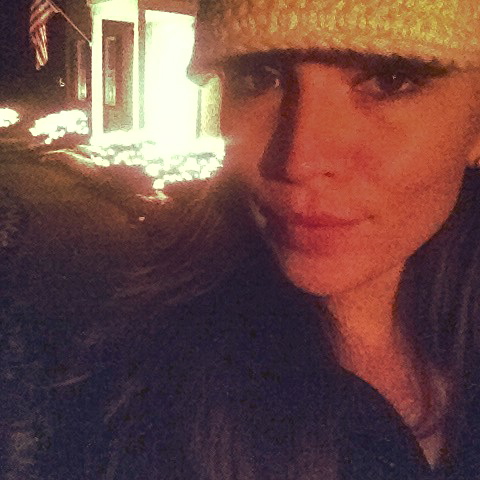 But it was still cold…brrrr.

12/14 During a lull in the snowfall on Saturday, my mother and I grabbed lunch in town before heading to the mall for some potential shopping. Lunch was good, the mall outing – not so much. We left with some soap from Bath and Body Works. Oh well. Back home we went and settled in for another night of snowiness. Fortunately, my brother and some of his friends showed up that night and we all had a bunch of laughs around the kitchen table. 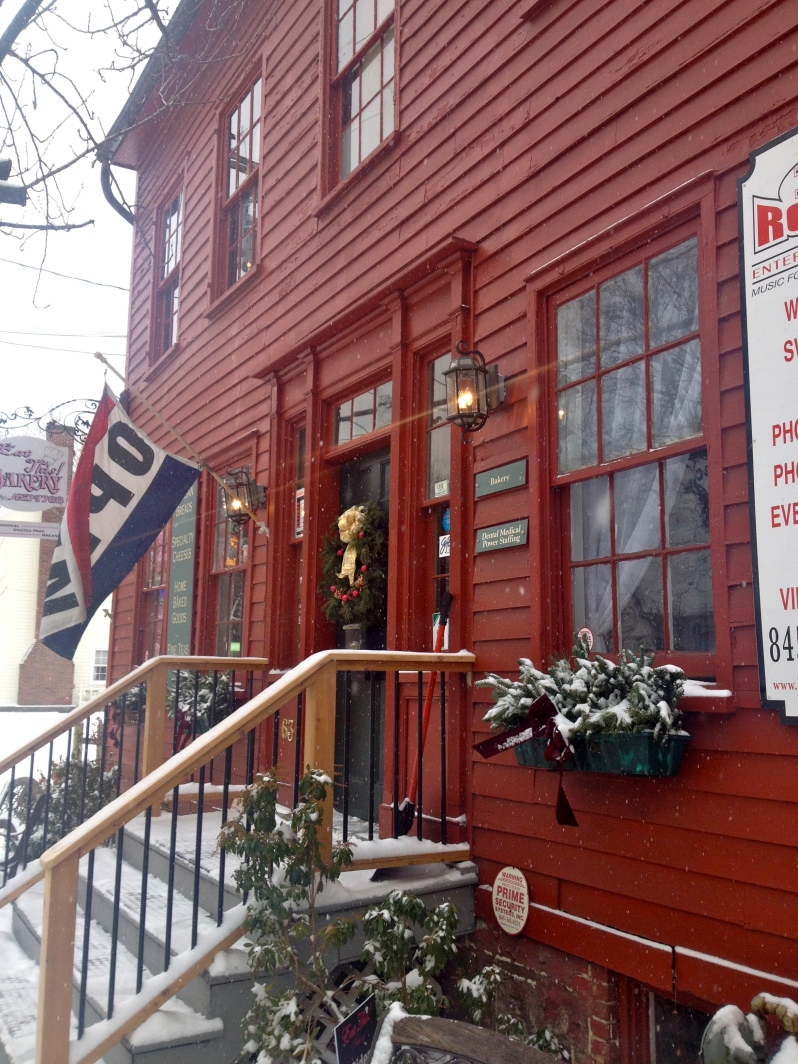 12/16 This Monday I was up bright and early at 4:30 a.m. in order to make it to the city by 7:15 a.m. In the city, I caught a ride to another shoot, this time for MTV2’s Guy Code. I was cast as “the girlfriend” in one of their comedy sketches. I don’t think I’ve ever laughed so hard. In addition to just having a ball on set doing my thing, I got to work with the hysterical guys on this show. Hysterical, yet super nice as well. It was once again another day of meeting some really awesome people. 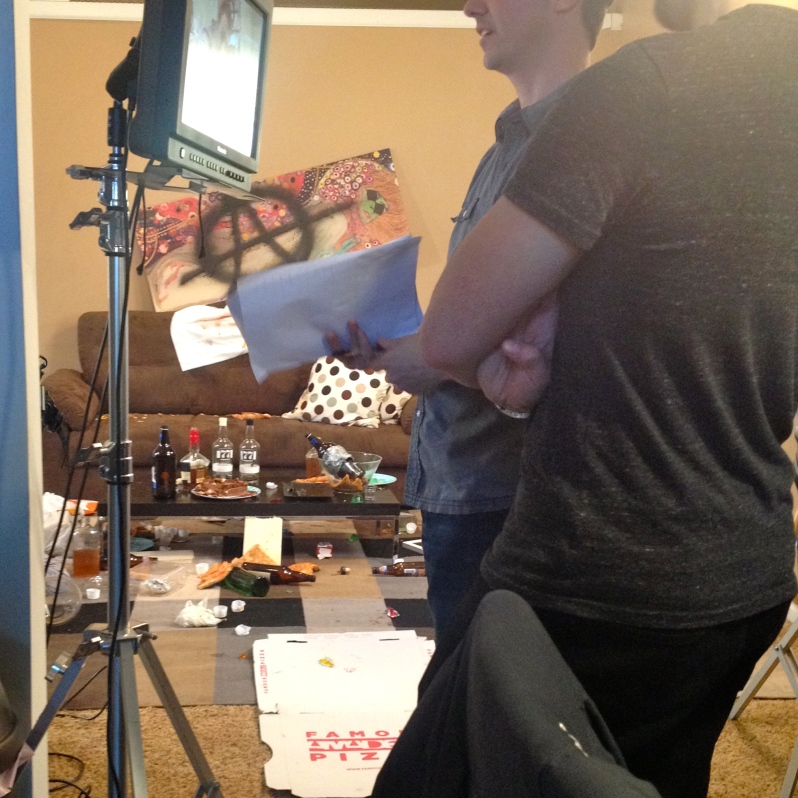 Just a preview of the debauchery that went on during the shoot. Can’t wait to see the final edit.

Once back in the city, I made my way to Williamsburg to meet my brother, Billy. We decided to grab some dinner and drinks at another one of my favorite NYC spots, The Meatball Shop.

My drink of choice here: The Moscow Mule. It’s served in a signature copper mug and so delicious. 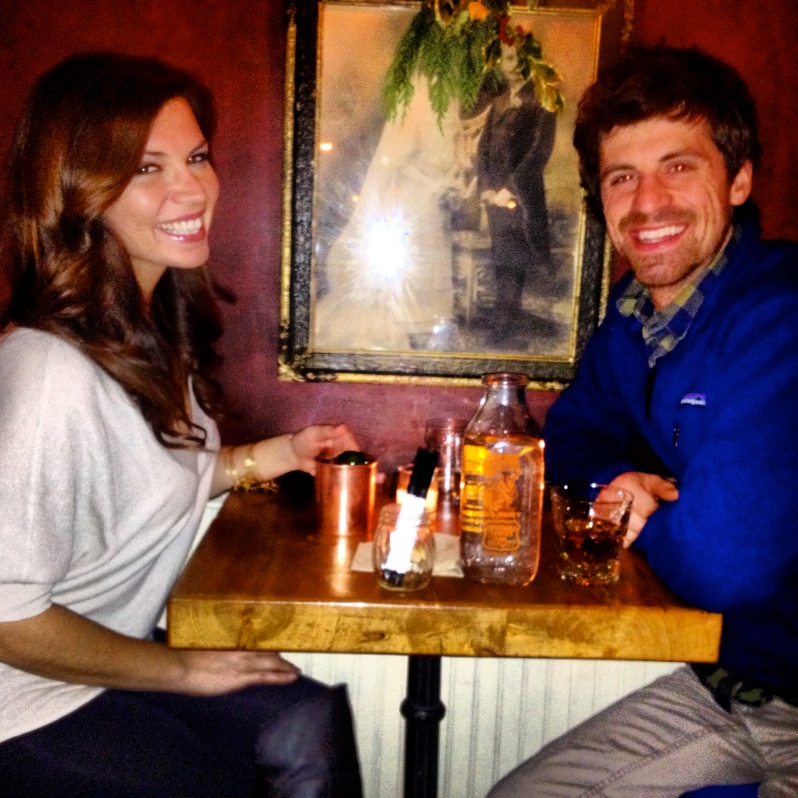 All smiles with my bro.

Did I mention that in addition to great meatballs, they also have amazing ice cream cookie sandwiches?

12/17 Tuesday, just two days ago, was another battle with winter here in New York. I stayed in Williamsburg the night before, so I woke up in Brooklyn. The weather wasn’t too bad in the morning, so I kept plans with a friend of mine and headed up to the Riverdale area in the Bronx to meet for coffee. 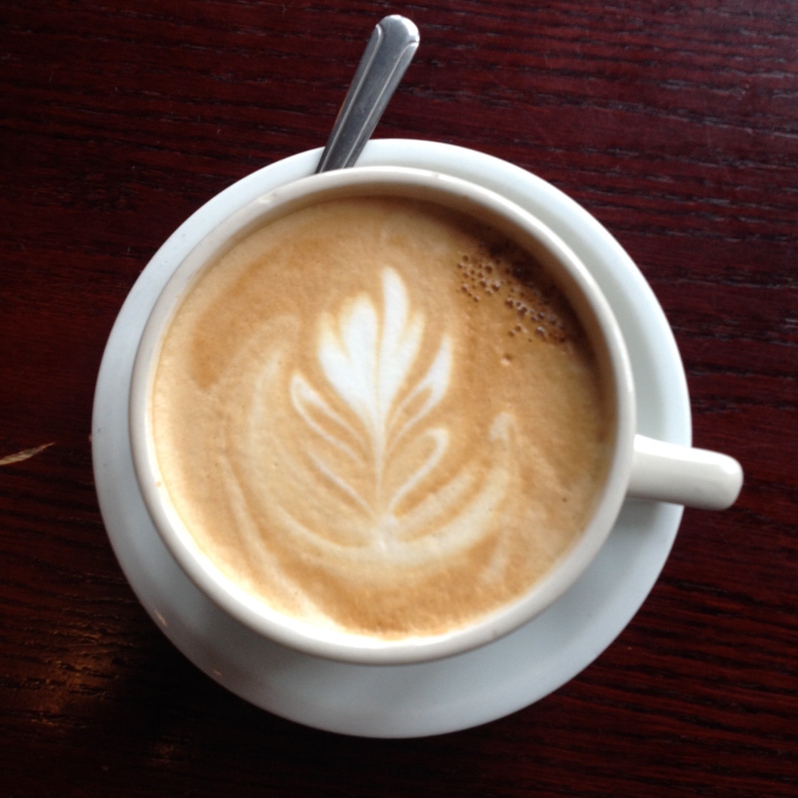 Don’t you just love when they serve lattes like this?

I was very happy to sip my latte, watch the snow fall, and enjoy good company at this cute place called the Indian Road Cafe. The cafe became even cuter when I looked at the sign above the bar: 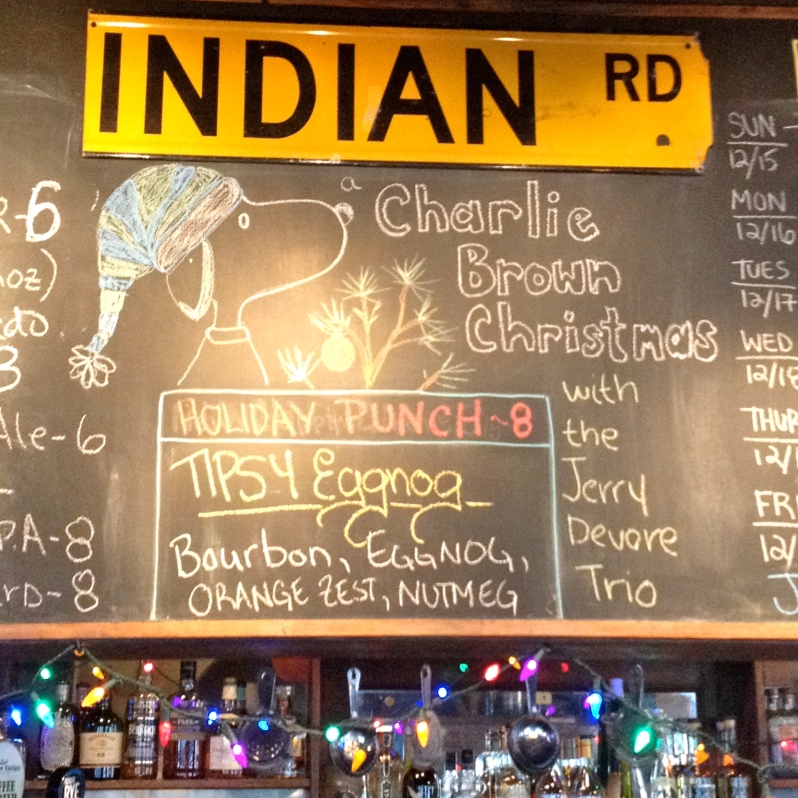 Eggnog?! Um, yes please!! Eggnog is probably one of my favorite indulgences during the holidays. And this version added an orange zest. Naturally, I had to try a cup.

After coffee, the snow was starting to subside in the city but was still falling hard near home. I didn’t think it was good idea to start driving back north. So, I decided to stay another night at my brother’s. And wouldn’t ya know…my friend invited me to come out to a Holiday Toy Drive party at the Soho Grand that night. Tis the season!

Cabbing it to the party!

12/19 And it’s today, Thursday, December 19th. The day that marks two full weeks as a 30-year-old. I have to say that after looking back, the first two weeks were pretty good. I’m kind of glad I had that writer’s block now. I like how this post turned out : )

Hope you all have a wonderful evening,